research in the lundquist lab

The Lundquist Lab employs a number of inter-disciplinary approaches to explore:
​This will lead to important knowledge to be harnessed for improving the productivity and nutritional quality of crops through enhanced stress tolerance, photosynthetic performance, nutritive value, and by the application of metabolic channeling for production of high value compounds and biofuels.

a Microdomain of thylakoids​

The plastoglobule can be seen as a microdomain within the thylakoid membrane, serving as a dynamic platform for recruitment of specific proteins and metabolites for efficient metabolism and signaling processes. As the requirements of the plant change, the composition is modified appropriately.

Evidence supporting this view has been reported; the 3 plastid-localized enzymes of jasmonic acid biosynthesis have been found to be selectively recruited to the plastoglobule during light stress in an abc1k1/abc1k3 double mutant, but not in the wild-type. This double mutant responds to the light stress treatment with a genetically-controlled degreening process  (see next section below - A Mediator of Plant Stress Response). It is believed that the dismantling of the thylakoid releases fatty acids that are transferred to the plastoglobule and serve as substrate for the jasmonic acid biosynthetic pathway. This same study also found evidence that Pheophytin:pheophorbide hydrolase (PPH) - one of the initial steps in chlorophyll catabolism - is drawn to the plastoglobule under these conditions. This is logical, as the immediate downstream step in chlorophyll degradation (Phytol esterase; PES) is also known to be localized at the plastoglobule.

The plastoglobule serves as a platform for recuriting and concentrating specific sets of metabolites and proteins. This figure depicts the recruitment of the initial three steps of jasmonic acid biosynthesis (Lipoxygenase, LOX; Allene Oxide Synthase, AOS; Allene Oxide Cyclase, AOC) and the chlorophyll catabolic enzyme, Pheophytin pheophorbide hydrlase (PPH) upon a perturbation inducing thylakoid disassembly. The three enzymes are recruited to the plastoglobule, likely to aid in turnover of fatty acid, while the PPH facilitates turnover of chlorophyll, together with plastoglobule-localize Phytol Esterase (PES). Image credit: Lundquist, et al. 2013 Plant Cell

a mediator of plant stress tolerance

A testable model for plastoglobule function

Through determination of the plastoglobule proteome, development of a co-expression network and detailed characterization of plastoglobule-protein mutants, a testable model for plastoglobule function has been put forth, incorporating the two broad roles for the plastoglobule outlined below.
1) Thylakoid Membrane Remodeling -- Stress Adaptations and Leaf Senescence
Plastoglobule function is tightly linked to thylakoid remodeling processes. This is reflected in the highly dynamic, reversible morphology of the plastoglobule. Plastoglobules are found to swell in size or increase in number, in response to most stresses (both biotic and abiotic). A strong functional link to the thylakoid is logical in light of the physical continuity of plastoglobule and thylakoid, enabling the exchange of metabolites and proteins. Consistent with the relevance to stress adaptation, Arabidopsis thaliana mutants impaired in the plastoglobule-localized ABC1K1 and/or ABC1K3 kinases show heightened sensitivity to a number of abiotic stresses, leading to alterations in lipid metabolism and recruitment of the jasmonic acid biosynthetic pathway to the plastoglobule. Understanding the relationship between plastoglobules and thylakoid remodeling will present significant opportunities for crop improvement under adverse environmental conditions.
​
2) Prenyl-Lipid Metabolism -- Photosynthetic Performance and Human Nutrition
Metabolism of prenyl-lipid compounds, such as carotenoids, tocopherols, and phylloquinone is a central aspect of the current plastoglobule model. These compounds are crucial to the photosynthetic performance of the plant, e.g. through light harvesting or photoprotection, and are directly relevant to human health. Plastoglobules are rich in prenyl-lipid compounds, including tocopherol, quinone, and carotenoid species, and host a number of enzymes in the metabolism of these compounds. Also localized to plastoglobules are several ABC1K kinases which evidence has implicated in regulation of prenyl-lipid metabolism. Work on ABC1K1 and ABC1K3 has supported this hypothesis, and identified several candidate targets of phosphorylation. Yet it remains unclear how the various metabolic processes of the plastoglobule are controlled and coordinated to enhance stress adaptation. This is a question of great importance as society seeks to expand crop yields and enhance nutritional quality in the face of climate change. 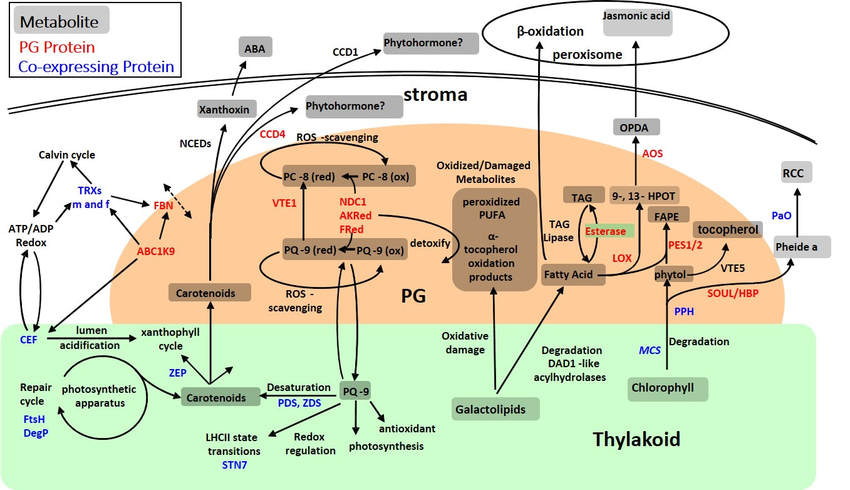 Questions being addressed by the Lundquist Lab include:
​
Powered by